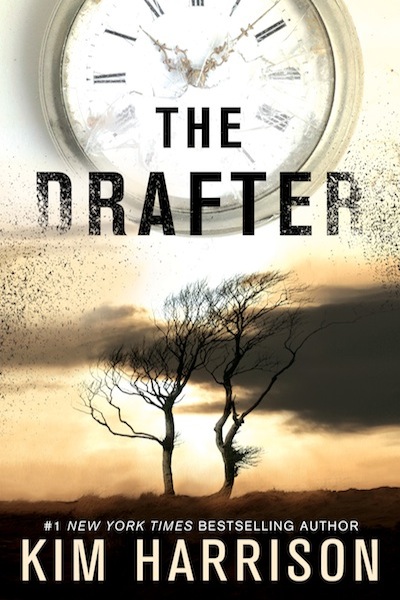 A million things have been going on lately, but that certainly doesn’t mean I love reading my books any less.  I’ve been trying to gear up for the new Kim Harrison release “The Turn” and in the process I wanted to catch up on her other series.  I read The Drafter a little while ago but in preparation to read the second book, I figured reviewing my thoughts on this one would be a good refresher.

Detroit 2030. Double-crossed by the person she loved and betrayed by the covert government organization that trained her to use her body as a weapon, Peri Reed is a renegade on the run. Don’t forgive and never forget has always been Peri’s creed. But her day job makes it difficult: she is a drafter, possessed of a rare, invaluable skill for altering time, yet destined to forget both the history she changed and the history she rewrote. When Peri discovers her name is on a list of corrupt operatives, she realizes that her own life has been manipulated by the agency. Her memory of the previous three years erased, she joins forces with a mysterious rogue soldier in a deadly race to piece together the truth about her fateful final task. Her motto has always been only to kill those who kill her first. But with nothing but intuition to guide her, will she have to break her own rule to survive?

I liked that this book was a departure from The Hollows. It feels like a totally new world. It gives me a Minority Report meets Groundhog Day type of feel (both films I enjoyed quite a bit), so it’s a bit more futuristic as opposed to an alternate reality. Peri is an interesting protagonist and the book benefits by being from her point of view.  There are a few twists and turns that make it worth it in my opinion.  Harrison has also done a fantastic job in the past with supporting characters so I had high expectations here. While I wasn’t initially gripped by the whole cast, there are some standouts.  I don’t know what it is about her pseudo villains but Kim always finds a way to make them a highlight of the series. They’re always interesting and never cookie cutter and I’m always interested in what will happen to them next. That’s just a signature of her as an author I guess.

There is a lot of world building and the rinse and repeat formula where we relive the scenes over and over again may bog the story down for the reader.  That can be a challenge to handle without making the story feel monotonous.  I can’t think of any books that accomplish this particularly well recently, but from a film standpoint I thought Edge of Tomorrow was great about it, though it had a bit of humor to help the story along as well.  While that may be the downside for some readers, I actually had an easier time with this one than with the first Hollows book, so I believe that is promising for a fresh new series.  I was able to finish this one at once, whereas for The Hollows I put the book down for a few months and returned to it after being urged by a friend of mine that the books get better (she was right and they did).

It’s not always easy to achieve cross appeal, especially when you’re used to urban fantasy, but the storyline has potential for some really interesting sequels.