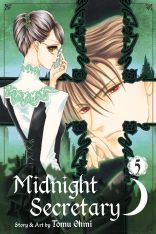 Series synopsis: Kaya thought she had found the perfect job when she became the private secretary of Kyouhei Touma – the director of a tableware company of the same name. Kyouhei is a capable director, but his arrogance and sluttish behavior are almost legendary. Kaya is doing her best to prove that she is capable in her work, but one night, by accident, she discovers his secret… of him being a vampire!

Review: I knocked both volumes out back to back so the storyline is a bit more blurred, but all in all there is necessary regression in the plot line.  The series wraps up with volume 7 which has not yet been released, so final conflicts and adversaries are making big moves.  The suspense is pretty good and while the plot is overall predictable, there are a few twists and turns here and there that keep the story interesting.  Volume 6 definitely leaves you wanting to know how it ends, so you’ll want Volume 7 right away.