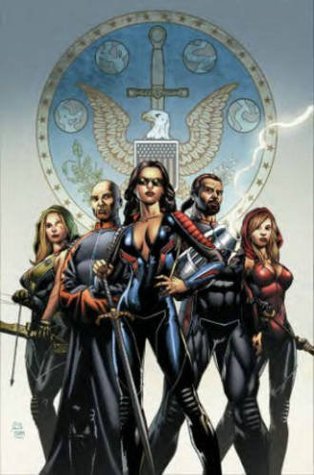 Synopsis: Sela. Robyn Hood. Red Riding Hood. Captain Hook. Neptune, God of the Sea. Van Helsing.  On their own, they are some of the most powerful beings in the Grimm Universe… but together, they are the Realm Knights! Brought together to stop an ancient evil from regaining his all-powerful weapons, can these conflicted warriors work out their own issues in time to save the world?

Review: I can always get behind a good graphic novel, and the synopsis here was practically irresistible! If you’re going to put a twist on classic fairy tales then sign me up!  Unfortunately this has happened more often so it’s becoming a trend.  That makes it harder for stories to stand out and be truly unique though a few still accomplish this.

For this graphic novel I’m more on the fence about it.  I don’t feel like the character’s back stories are incorporated well enough for me to buy why these characters are special. They aren’t anything like what I knew or grew up with.  They really could just be anyone but that’s a harder selling point.  That said, the story kept my interest for the most part.  I do want to see where things go next, but it’s mostly because of a potential villain, or at least a character that is clearly in the gray territory.  I am curious about his motivations.

All in all it’s a good read to pass the time. The artwork is good, though not great. And there appear to be spin-off stories for all the main characters toward the end of the volume where we see brief side story prequels for them.  Though I wasn’t a fan of how throughout all of those prequels we see little notes to buy other issues to read even more about their back stories.  I understand the marketing tactic behind it, but as someone who doesn’t really read comics and graphic novels too often, I want everything I need in the Volume I am current reading and I don’t really care to seek out half a dozen other comics to get the big picture.

That said, I will read the next one, Volume 2 that is.

*ARC provided by Net Galley in exchange for an honest review.