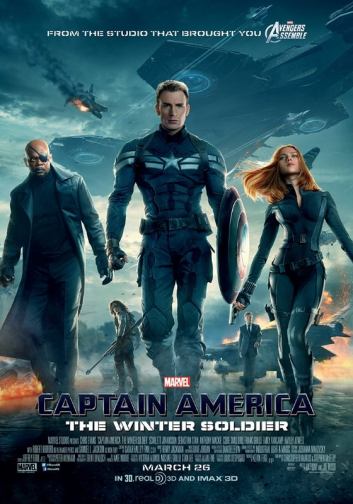 Steve Rogers struggles to embrace his role in the modern world and battles a new threat from old history: the Soviet agent known as the Winter Soldier.

I saw two screenings with my buddies Leanne and Anthony over at The Grand Shuckett so we held a discussion (aka gushfest) here:

If you want a great time at the movies then make sure to see Captain America this weekend! I’m sure my fellow Marvel fans won’t need much prodding, but this film was definitely a pleasant surprise. I enjoyed the first film, but the sequel took things to another level creating a fantastic balance of great plot, action, and character development.  I think fans of the Bourne Identity franchise should enjoy the level of action and espionage involved.  Of course Marvel gives it its own flavor.  The fight choreography was completely on point.

I thought it highlighted characters very well here in a way that couldn’t really happen with The Avengers (let’s face it, that movie was too crowded to allow for it). They were fleshed out a bit more and I found myself really invested in the relationships, especially the bromaces.  I think this is the best movie to showcase the badass that is Nick Fury.  The car chase scene in this film is EPIC!! I thought Scarlett Johansson was at her best here as well compared to the other movies.  I don’t believe her character needs her own film, but she is a great supporting character.  Anthony Mackie’s addition was one of the best things to happen to this franchise.  I loved, loved, LOVED him in this.  He had great chemistry with the cast and I hope they include him in The Avengers 2 as well.

This is a very important movie for the Marvel franchise and it is probably the most important as far as The Avengers 2 is concerned, especially compared to Iron Man 3 and Thor 2.  Make sure to stay through ALL of the credits. I’m talking until the screen goes black and the lights go on.  It’s a good thing that most people know better already when it comes to a Marvel film.  These  scenes will leave you absolutely pumped for the next one.

I really wasn’t sure if Marvel could top The Avengers, but I initially left Captain America thinking it was the better film.  If it’s not then it’s definitely on par. Because the Cap is so fresh in my mind now that could make me biased.  I will have to give it a year and see how I feel then after watching both movies.  At least it will be a fun chore!  I can definitely say with complete confidence that this is my favorite film of 2014 so far.