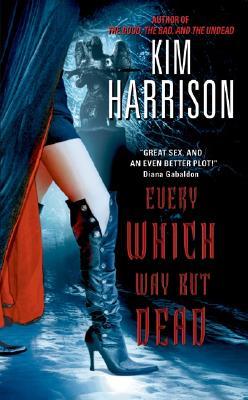 I did include some quotes for my re-read and you can check them out with my original review here (just scroll to the status updates):

Thar be spoilers ahead!  I finished my re-read of book 3 yesterday! As I mentioned before, this book was an early favorite that held all the way up until Pale Demon.  The excellent doses of Kisten and Trent certainly worked in its favor, but knowing what we know now about Rachel and the course of the series has been making the little clues all the more fun to read.  It looks like Al realized what she is here.  I would have loved to have known what he was thinking at that time.  His character definitely still gave me the willies at this point, but he never ceased to be interesting. We also meet Newt and I’m amazed at how consistent she’s been though of course she’s grown a little as well.   With Takata’s introduction I found myself reading every scene from him as her father and it adds a whole new layer to the mix. It all makes so much sense now, like the lyrics of red ribbons.

One thing I never realized was that after the boat explosion, Rachel and Kisten never had an on-screen discussion about it which I found very odd.  People did die because of what he did and she was almost among them.  Considering her attitude about that kind of thing back then I would have thought it’d be more of a sore spot for her but she just kind of lets it roll off. And yet at this point she’s still rationalizing to herself that Trent’s a “drug lord, murder, bad man” after he saves her life and they’re eating waffles.  Which by the way was one of my favorite scenes of the entire series (does anybody miss Maggie as much as I do?) including the events that led up to it when she first arrived at the compound all the way up until when she does a little manipulating of her own to get more information out of him about her father.

Lots of awesome things come out of this book, especially that waffle recipe that I now use to make my own waffles.