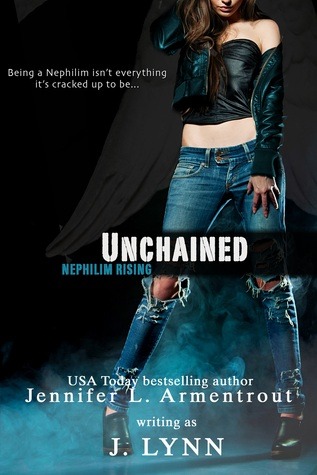 Synopsis: Between the pissed off creatures that want demon-hunter Lily Marks dead and the fallen angel who just…wants her, Lily is about ready to trade in forever for a comfy job in a cubicle farm. The fact that she and Julian are civil to one another is enough to have her thrown out of the Sanctuary, but she can’t shake her not-so-angelic stalker or how he brings her dangerously close to ecstasy.

Her forbidden relationship with Julian provides the perfect fuel for suspicion when a traitor is discovered to be working within the Sanctuary. Lily quickly finds herself hunted by well, everyone.
Her only hope is to discover the real traitor before she loses everything–and she’ll need Julian’s help. That is, if Julian is really there to help her…and not destroy her.  Yeah, being a Nephilim isn’t everything it’s cracked up to be.

Review:  After reading Jennifer Armentrout flex her YA skills with Obsidian (Lux #1), I was ever so curious to check out her adult skills with Unchained.  I will be honest and say that any series set in Washington, DC like this one is will automatically make me a little biased.  But I probably would have loved this book if it took place in Timbuktu (well, not really, but any urban setting would have worked). I have grown to enjoy the fallen angel subgenre almost as much as a vampire one and books like this are probably why.

After reading the novel I learned that this was actually an earlier novel by Armentrout and while I enjoyed it, finding the plot and characters satisfying enough, I wasn’t surprised.  If there was one area I could criticize it would definitely be the world building aspect.  We definitely hear about Washington, DC, but she does very little to actually show us the setting with good details.  It’s only because I live here that the setting makes sense to me.  She has since improved in that area with her Lux novels.

The characterizations are very good, especially when it comes to Julian, the fallen angel. I don’t doubt he’ll make the book boyfriend list for many readers.  While I personally liked Lily, I think she would have to grow on other readers. She’s brash, overconfident and loves to dive head first into danger. But she’s Nephilim (a fallen angel/human hybrid), what do you expect? She’s also a bit of a rebel but for me that made her all the more fun. She’s good at what she does so she can back it up…for now.

While I would call this an urban fantasy, it definitely comes on strong with the romance too.  The chemistry between Julian and Lily is totally scorching, but you’re never allowed to feel comfortable with their relationship because they are inherently on opposing sides. There’s just enough tension to keep things interesting the whole way through. I was honestly fearing a potential love triangle, so if you’re concerned about that, don’t be.  There are definitely bigger fish to fry as to what can drive a wedge between the two.

There’s a lot of action and brutality and I honestly wasn’t always sure of the characters’ motivations which kept things from being too predictable.  All in all there was never a dull moment for me, so even though this is an earlier work of Armentrout, it’s still plenty enjoyable and re-readable. I will absolutely be reading Book 2 and I’m crossing my fingers that it can release on time in 2014.

This article has 3 Comments