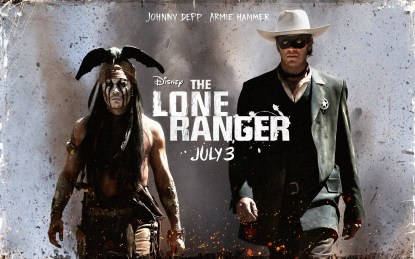 Native American warrior Tonto recounts the untold tales that transformed John Reid, a man of the law, into a legend of justice.  I’d like to think that remakes are a great way of introducing a new audience to an age-old, but beloved franchise.  I personally didn’t grow up watching or following this show, but I knew a few things about it.  Unfortunately, I don’t think this film did the franchise any favors in terms of capturing a new audience, and I have a hard time believe it would please the old one.   I will outright admit that this film briefly put me to sleep at least 3 times.  Even still, I didn’t miss much story or plot.  You will feel every minute of its 2 and a half hour run time and that’s never a good thing. The film tried to do a little too much. There were serious moments, but it was offset by light-heartedness and comedy as well. I tend to prefer my westerns be on the dramatic side, and MAYBE even include Leonardo DiCaprio (ie: Django Unchained and The Quick and The Dead).

I found myself mostly interested in the action scenes that would justify how it racked up a $250 million price tag.  Perhaps they were banking on a lot of international success because this just didn’t seem like a smart move to me. Can you do that for an Avengers or Iron Man or Superman or Fast & Furious film?  Absolutely.  They make the dough because the demand is there.  You can do that for a Pirates of the Caribbean film too even with its waning popularity. But for this, I can only think they are setting themselves up for a 2013 disaster a la 2012’s John Carter. I guess they just never learn! I doubt this film will perform very well overseas and I feel like it’s not going to perform well domestically.  Oh well, it’s not my money.

I have been and remain a Johnny Depp fan, but it becomes hard to defend him lately.  It’s like he will only work on Tim Burton or Disney films where he can play weird and quirky characters for a guaranteed $20-$50 million per film.  Can I blame him?  Not really.  We all want to make more by doing less.  It’s just becoming so rinse and repeat these days with him that I question if the passion is even there.  I know he owns an island, so perhaps he needs to fund that.  I just wish he would take on more interesting projects.  I loved him in Blow as much as I loved him in Edward Scissorhands.  It’s just that this “eccentric” shtick is no longer interesting for me. I did enjoy the 4th pirates film more than the second and third, but the last film I genuinely loved and can watch again and again would be Sweeney Todd and that was 6 years ago.  He’s a great actor and I just wish he’d take more roles to stretch different muscles. That said, I did not have a problem with his portrayal of Tonto.  He did a good job.  And at 50 he looks absolutely amazing.  http://www.youtube.com/watch?v=LERFx8cl-Zw

One highlight of the film was actually the title character. This was my first time seeing Armie Hammer in action (he is Armand Hammer’s great grandson–as in, the baking soda) and it’s nice to know he actually has some pretty good acting chops. I  thought he performed the role very well and with a stronger tighter story it would have been even better.  I like being pleasantly surprised. I understand he would like to be involved in sequels, but I’m going to make an early prediction that future sequels won’t be green lit.  That said, I went in wondering “Who is Armie Hammer” and came out wanting to see him in more roles.   It turns out he will be co-staring with the new Superman, Henry Cavill, in The Man from U.N.C.L.E.! They both are easy on the eyes and pretty good actors, so I’ll be looking forward to that one!