Since Kim Harrison is not stopping close enough to me this year, and won’t be attending San Diego Comic Con, I have decided to live vicariously through some of my lucky followers and friends.  Our very own Diva was able to meet Kim during her stop yesterday in Austin, Texas.  Diva was so kind as to provide a write-up that I’ll post below.  There’s definitely some food for thought in there!

Last night I had the pleasure of meeting Kim Harrison for the first time as her book tour brought her to Austin, Tx. A friend and I, said friend also being a devoted Hollows fan, made the hour long drive to see her and the trip was completely worth it. The signing was held at Book People, which is a very cool independent bookstore and if anyone is ever in the Austin are I highly recommend checking it out. We arrived a little over an hour early and that was plenty of time to secure second row seats right in front of the speaker’s podium.

Kim appeared right on time and even though she has often said that speaking in front of people is slightly outside of her comfort zone, she appeared fresh and relaxed. She began with the usual reading of a book excerpt. This time around it was another Trent/Rachel scene which marks at least the second year in a row that she has selected a scene with the two of them. Good omens, perhaps, for fans of the duo. Once the reading was done Kim began the Q&A portion of the evening. She fielded the usual questions that seem to pop up at every event, i.e. the correct pronunciation of Al’s name, what authors inspire her, why the play on Clint Eastwood titles, why did she kill Kisten. Apparently there is a significant segment of the population that never goes online for this information, lol.

There were a few nuggets of interesting information however. Kim revealed that the pilot/tv adaptation
that the CW network had been working on had cut out Jenks. Blasphemy, I say. The chrysalis that
Rachel snatched from Al and that has long sat on her windowsill will, in fact, come back into play and
we will find out its significance. By the sounds of it this may happen in the final book but whenever
it happens it will shed some light into why Al has been so “bitter” and “vindictive” (Kim’s chosen
adjectives), and why he sees himself in Rachel. So some good stuff in store for Al fans everywhere.

There were, surprisingly, no real character based questions so I ponied up the one and only Trent
related question. Looking back through the series, I’ve always been curious about the two times that
Kim was seemingly prepared to pair Trent off with someone. The first time of course being his marriage
to Ellasbeth and the second time being when Ceri was introduced. If you recall, Ceri thought that Trent
was handsome and she seemed like a perfect fit for Trent, on paper. Kim acknowledged that it had
been her intention to pair Trent off both times, that she has tried to toss these women at Trent but it
never stuck. Maybe like none of Rachel’s men have ever stuck? Hmm? Anyway, Kim said that Ceri is
much happier with Quen. Ellasbeth, however, is another story and hang onto your hats people because
Kim confirms that Ellasbeth will be around for the rest. Of. The. Series. Is that a collective groan I hear?
Thought so. According to Kim, Ellasbeth is too strong and determined, has too much money and too
large of an ego to just go quietly into that good night. She also reminded the audience that Trent is
“very duty oriented” sooooo…make of that what you will. Personally, I still refuse to believe that she
would sentence Trent to a marriage with that harpy, shrew of a woman. That’s my story and I’m sticking
to it.

Once the Q&A was over Kim took a brief moment to take a group picture with everyone who was
wearing a tour t-shirt. I had mine on! Then signing began and my friend and I were lucky enough to be
in the first batch of people. Kim’s husband was there and he was just as gracious and personable as Kim.
He entertained us all while we waited our turns in line, answering more personal questions about Kim
and their home life – all with Kim’s blessing, of course. While I was in earshot I learned that Kim’s eldest

son is currently serving in the United States Marine Corps and that he is due to get out of the military
the same date that their youngest son will be graduating from high school. He joked that he’s not sure if
they’ll be empty nesters that day or have a full house again.

Since she seemed so open and friendly, I wasn’t nervous at all about getting some one-on-one face time
with Kim when it came my turn to get my book (and Nook!) signed. She recognized my name as being
one of the occasional posters on her Drama Box and she gave me a big hug, which just totally made my
night. I didn’t ask her any additional questions, just told her that I was going to trust her on the whole
Ellasbeth thing. She laughed but hey, at least it wasn’t the evil, maniacal type of laugh.

So there you have it. The Ever After book tour is officially in the history books for me and Kim did not
disappoint. Here’s to looking forward to 2014 and book 12. And to all the Ever After re-reads until then.

Thank you, Diva, for sharing the experience! 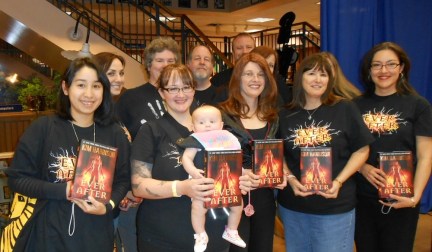 This article has 7 Comments